The approach recommended by Cisco for large institutions for authentication into the WebEx website is by using an institution-wide directory service via SAML 2.0. With this method, the institution uses a directory service (Active Directory, eDirectory, OID, OpenLDAP, etc.) which either supports SAML itself (such as the ADFS module within Active Directory) or which is connected to an external SAML Identity Provider (Okta, PingFederate, Shibboleth, SimpleSAMLphp, etc.) using LDAP to bind WebEx's authentication to their own.

Once a user's browser is authenticated with the institution's portal via their Directory Service or Identity Provider (IdP), they can be automatically signed into all systems which federate with it and support Single sign-on (SSO).

When CirQlive MEETS is being used for integrating an institution's Learning Management System (LMS) with WebEx, and this is the only method by which a connection to WebEx will be created, the process is similar. MEETS has its own IdP which is capable of signing Security Assertions to authenticate itself with WebEx's APIs on behalf of users, which can be done once a private and public key pair have been generated and entered into MEETS and WebEx, respectively.

When it comes to institutions using both their own directory service or IdP as well as CirQlive MEETS, this process becomes slightly more complex, as there are now two separate pathways which both need the ability to log into WebEx. Unfortunately, WebEx was designed to only expect a single source of federated authentication and consequently only allows for a single authentication key for such. Due to this limitation, it is necessary for all platforms authenticating to WebEx to do so using the same set of authentication keys.

This document will outline the method by which each system connects to WebEx when in use without the other, followed by various solutions for correlating multiple systems so that they are all capable of effectively connecting to WebEx without conflicting amongst themselves, as well as describing some security best-practices when doing so. 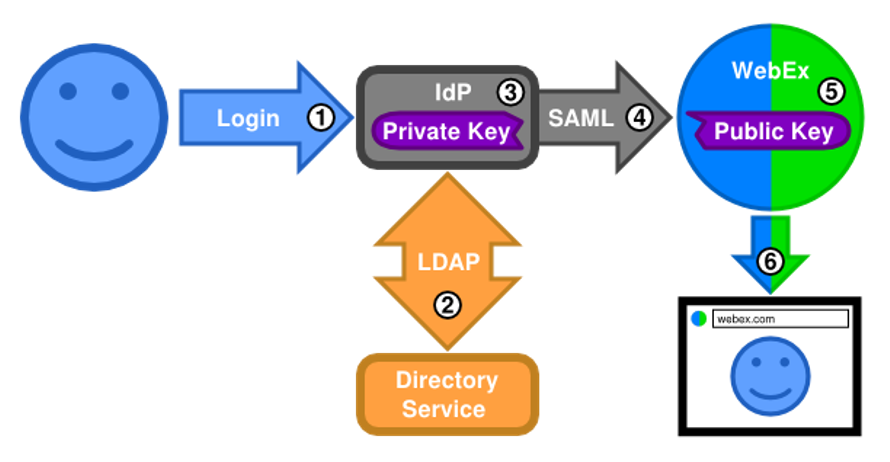 Authentication from a directory service directly into WebEx works as follows:

Multiple SPs may be connected to the same IdP, allowing users to use a single set of credentials everywhere.

A.  Depending on how it is set up, the LMS's user authentication may be:

As the distinction of which particular method is not relevant to the focus in this document of how the LMS connects to MEETS nor to how WebEx is accessed, this will be treated as a single "the user logs in to the LMS" step for the remainder of this document.

B.  The LMS's connection to the CirQlive MEETS integration platform is federated via the LTI protocol. An important note is that even though users may be authenticating with the LMS via an SSO technology, the LTI protocol does not itself make use of SSO when connecting to additional services, and therefore the SSO information is not passed on to MEETS. The information it does pass on is:

C.  MEETS communicates with WebEx services via the WebEx APIs.

One of MEETS's operating models includes the ability for it to authenticate itself to WebEx on behalf of the user using Security Assertions. (Other modes are discussed in their respective pieces of documentation and are not relevant to the present discussion.) This mode works as follows:

A.  The user uses one of the methods described above to log into the LMS.

B.  As described above, the LMS authenticates the user to MEETS using the LTI protocol, and sends along the user's email address as part of its information.

C.  MEETS informs its own built-in Identity Provider (IdP) of the need to authenticate itself to WebEx on behalf of the user (using the user's email address either directly or for an ID lookup). The MEETS IdP signs a Security Assertion using a Private Key.

E.  WebEx validates the signed Security Assertion against the Public Key it has stored which corresponds to the Private Key which was used by the MEETS IdP to sign it. Note that WebEx makes use of the Security Assertions in a non-standard manner for this authentication step and does not make use of any other SAML-related specifications beyond this step, as WebEx's APIs do not use the complete SAML 2.0 protocol for federated authentication and identity management; They offer their own communication protocol instead.

F.  WebEx sends back a login token to be used for the actual API communication.

G.  MEETS then has access to continue communication with WebEx on behalf of the user via its APIs.

Note that rather than authenticating the user themselves, this process authenticates the MEETS platform to perform API functions on behalf of the user.

It is important to note that since the user is authenticated based on their email address (directly or indirectly), the email address used for a particular user in the LMS must match the one which is used within WebEx for the same user. In the same vein, it is also important to note that in order to be secure and to prevent users from impersonating each other, the LMS must be configured to either require confirmation or verification of ownership when users change their email addresses, or else disallow users from modifying their own email addresses entirely.

As mentioned above, WebEx was designed to only expect a single source of federated authentication and consequently only allows for a single set of authentication keys. As such, all systems authenticating to WebEx must use the same private key, even if they are otherwise not connected to each other.

CirQlive recommends one of the following three architectures to allow the institution's IdP (or IdPs) to authenticate to WebEx alongside and concurrently with the MEETS IdP.

This architecture is the most popular one and simplest to set up. It functions by simply using the same key pair for both IdPs.

This architecture is generally recommended for institutions that host their own IdP(s) on-prem or can otherwise manage and access their own Private Keys. 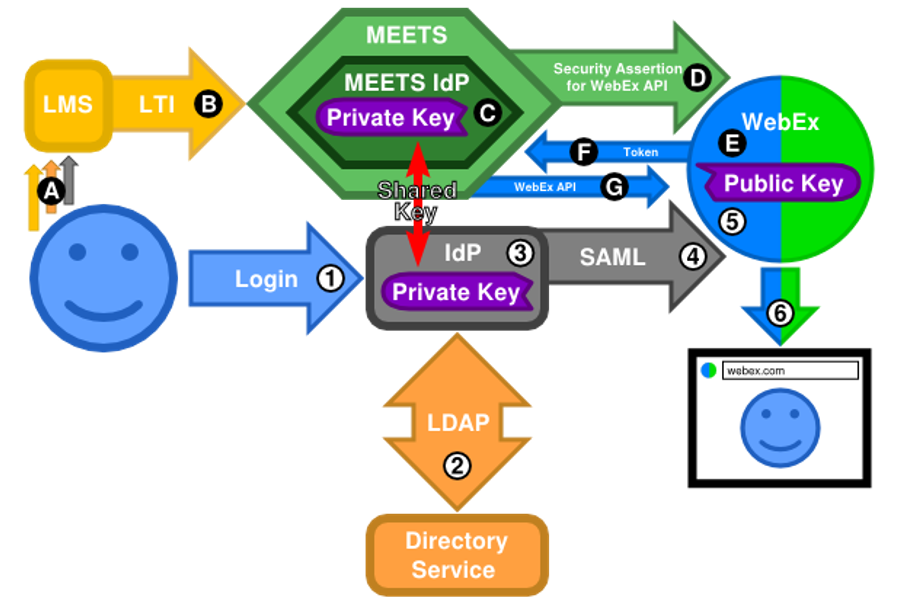 The setup for this architecture is to simply ensure that the same Private Key is present in both the MEETS IdP and the institution's IdP, and that the Public Key which corresponds to it is the one which has been uploaded to WebEx. In addition, there are a few other pieces of identifying information which must match in all three places (MEETS IdP, institution's IdP, and WebEx itself). The exact setup is described more fully in the MEETS SAML Administration Manual.

It is important to note that SAML is built upon XML Security's XML Signature which is notorious for having a large attack surface, which in turn affects SAML [1] [2] [3] [4]. Therefore, in order to minimize possible attacks, an IdP should be using a separate key pair for each Service Provider (SP) which differs from the key pairs used for every other SP. This is especially true when there are multiple IdPs which are intended to share access between some SPs but not others.

In this specific case, ideally, if the institution is not already using the aforementioned security recommendation, a distinct key pair should be generated for use only with WebEx, in order to provide MEETS access solely to WebEx services without potentially exposing access to other services which are not required. This is analogous to the real-world example of not using the same key for your house as you do for your car, office, and gym locker. While it may sound convenient to have one key for everything, you wouldn't want to trust your mechanic with the key to your house every time you brought your car in for a repair. You wouldn't want your visiting in-laws to be able to show up at your office just because they have a copy of your house key. And if you ever lost a key somewhere, you wouldn't want whoever found it to gain access to everything you own all at once.

If WebEx is the only SP of which the institution is making use, then the above paragraph does not apply, as there are no extra security considerations to account for. Keep in mind, however, that if any other services are added down the line, they should have unique keys generated for them as they are added, rather than re-using the one already in use for WebEx.

This architecture is generally recommended if an institution is not able to manage their private keys directly, which is typical when using a hosted IdP service. However, when managing an IdP locally, the institution usually has full control over the keys they work with and is usually better off with the first architecture (along with its best practices). 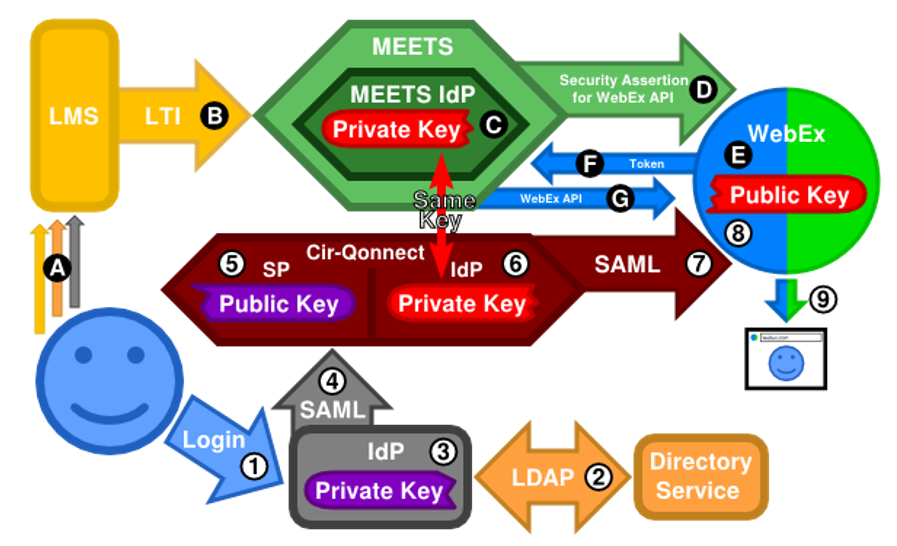 From the user's perspective, the experience is nearly identical to having the institution's IdP forward them directly to WebEx; The user logs in to the institution's IdP as usual, and gets pushed into the WebEx website. All user data is passed on exactly as received, so any special SAML attributes being used with WebEx will be passed along as expected. The only visible difference that users might notice is that, due to the fact that the backend routing between the login portal and WebEx now has one additional step in the middle, the URL in their browser will change an extra time as it passes the data through the relay, but even this is fully automatic and lasts only a second or two in most cases.

As in the first architecture, it is best to use a separate key pair for each service being connected to from the institution's IdP.

This architecture uses Cir-Qonnect itself as the institution's primary IdP, cutting out the middleman. This approach is very similar to the first architecture, although requires less hassle as the Private Keys are internal to CirQlive's systems and can therefore be accessed by both automatically rather than needing to be manually shared across two separate systems.

This architecture is generally recommended if an institution does not already have an IdP set up to connect to WebEx, and would like to achieve Singular Authentication with the LMS integration as well as still allowing users to access WebEx directly. 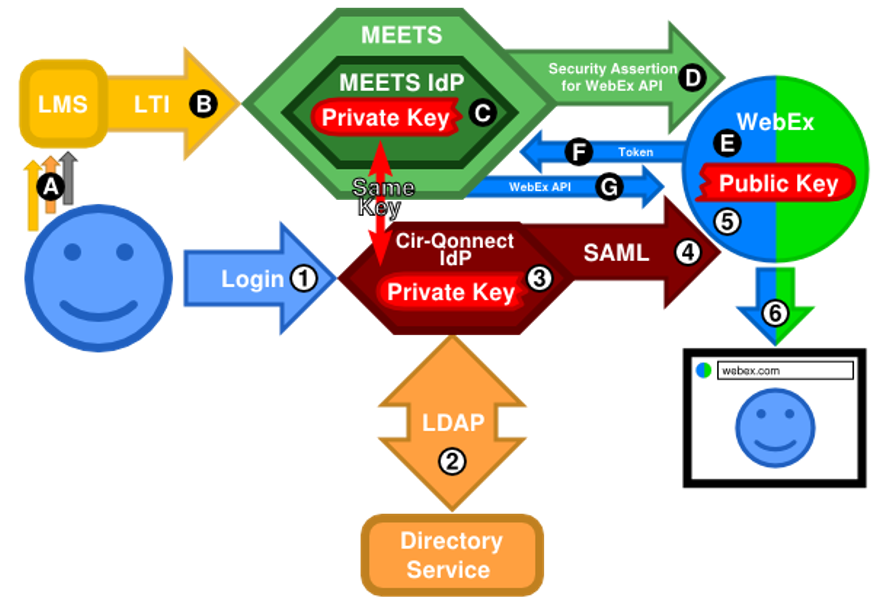 Cir-Qonnect mandates certain best practices which are in many other IdPs only considered optional (for example, requiring separate keys for each Service Provider). As such, it ensures that your setup is adhering strictly to the relevant security precautions.

Did you find it helpful? Yes No

Send feedback
Sorry we couldn't be helpful. Help us improve this article with your feedback.